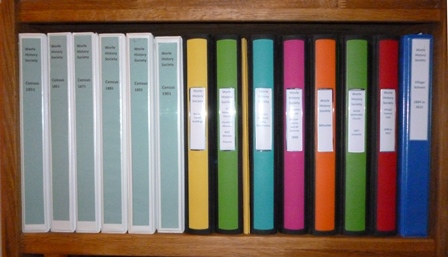 There is never time at Open Meetings for members to make use of the resources, hence the decision to add this new page to the site with details of what is available.

Members, please make use of our collection. All you need to do is ring Raye on 516773 and arrange a time to come along for a couple of hours.

Planned Research Days are listed on our Research Page.

We now have about 50 books in our Research Library and a plethora of files. The list below needs to be updated, but see the new list of research library books further down this page.

Please note that we can only offer Research Sessions to current members, and the material is all relevant to the village of Worle and its immediate environs. Non members are welcome to contact us with enquiries and we shall do our best to help.

These are in the process of being transcribed.

The Society's laptop, on which a great deal of material is stored. We have a range of CDs on a variety of topics, which can be used.

The Society's publications, including books, booklets and pamphlets. See PUBLICATIONS on the topbar for full details.

Tithe map of the Parish of Worle A0 size and in full colour,produced by Peter Johnson for the Society

Family Trees: These are laminated A3 sheets of prominent local families,including

Edwardian Worle: a new file under construction. 1901 and 1902 are just about complete and are fascination. full of cuttings from the old Gazette and the Mercury and other support material.

50 Vicars of Worle: File contains at least one sheet for each vicar since 1325 and many pages for others. An endless task with several members working on their 'adopted' vicars.'

Worle's Carnival traditions: File traces the Whit Monday carnivals from the British Legion efforts in 1950-1952 through to 1958, throught the dark ages of no carnivals to its brief reinstatment in the early 80s. Pictures, cuttings and comments.
New!!!

Worle's Rhynes and Waterways: a 400 year history compiled and donated by Barrie Underwood. Contains excellent maps and pictures as well as a very informative commentary. New!!!

Worle's Listed Buildings: Details supplied by English Heritage website,
and enhanced with use of photographs and background research. Ongoing.

Worle's Windmill: Now known as 'The Observatory' This file contains the history of the windmill back to 1705 and up to the present day, with
details of ownership and references to the original documents, which we have photographed for our records.

Churchyard research: We have 10 files containing the names, dates, inscriptions and a description of the condition of the graves and memorials together with photographs of each grave in St. Martin's Churchyard. The associated database has 1467 records to date.

There are also two reports based on research into 2 early photographs. Graves were identified, dated and named. Results written up for archive. Ongoing research. Also Brian Patch's research on part of the top churchyard.

Village Walks: File contains powerpoint handout sheets provided to walkers in the 2010 season of summer walks, with notes. Separate file from Dave Hart covering the route and points of interest visited on the 2011, 2012 and 2013 Summer Walks

People of Worle: A file in alphabetical order of everyone and anyone who has lived in Worle and contributed to village life. This is embryonic and
constantly being built upon. It will probably metamorphosise into an index filing system, cross referenced to the family trees.

World War 2 Files: Now complete: we have 1939, 1940, 1941, 1942, 1943, 1944 and 1945. Material is arranged in date order, mainly taken from the Gazette and the Mercury, but with other relevent additions, like minutes of local organisations and personal notes. These files contain much more detail than the Journal listed under PUBLICATIONS

Worle Senior School photo collections of class groups, sports teams other pictures from 1948 to 1962. Stored in 2 files, with a database. Many of the pupils and staff are named.

Worle Cricket Club: Includes pictures from 1901 to 1950s and selected extracts from their Minutes Books [given by Johnnie Tucker]. Originals available by special arrangement.

Fussell's Rubber Co. Ltd. This contains the source material on which the booklet is based, mostly contributed by the family of the founders, and some taken from local newspapers.

Weddings File: Pictures and comments featuring Weddings which took place in Worle, or had a close Worle connection. Collected by Nadine Kilvington.

Methodist Chapel, now Worle Community Centre: File providing the history of the chapel back to 1835, together with architects plans of the extensions begun in 1965.