Check back here regularly to find out what's going on at Worle History Society.

Weston Civic Society gave three awards for excellent civic development in 2017.  Two of them were in Worle.  Tamar Court was one;  the other is featured below in the article about Worle Village Primary School, one the monastic tithe barn. 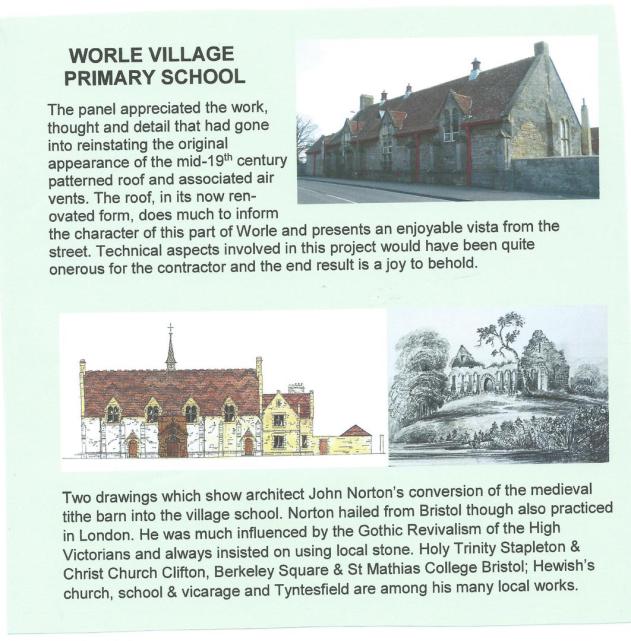 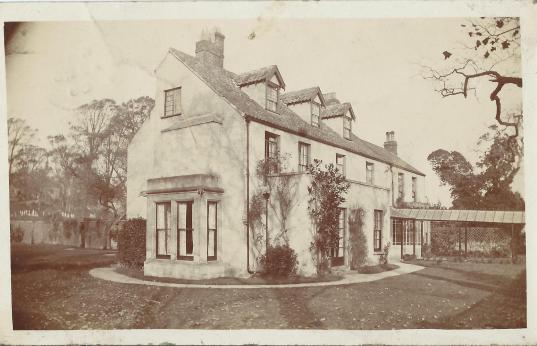 Take a stroll along the north side of Worle High Street and you will spot a building with a surprising history.  Now occupied by Nigel Groves Funeral Directors and Berry, Redman, Gordon and Penney, solicitors, it is a long, shallow building with an oddly shaped roof line at the Weston end and is surrounded by concrete and car parking spaces.  The attractive dormer windows have disappeared:  even the bay window and the veranda are long gone.  Now take a look at the photograph taken in 1907.  The roof line is identical, but there is a pathway framing the house and climbing plants adorning it.

The 1840 tithe map provides the first evidence I have found for this building.  Its plot is numbered 507 and is described as ‘Vicarage house, garden and premises.’  At that time it was the home of Rev. Nathaniel Wodehouse, who became vicar of Worle in 1829.  The house stood in 5 acres of glebe land and whilst it may have looked attractive, it had nothing in the way of modern facilities, but the Wodehouses lived there happily and only left in 1871, following Nathaniel’s death.  Rev. Charles Doherty moved in for a few years, and then in 1875 Rev. William Rose took up residence for over 20 years before moving to the parish of Hutton, nearby.  A succession of incumbents followed:  Rev. Chas Kent [1896], then Rev. Alfred Cecil Harman [1902] and Rev. Frederick Bentley in 1907.  In all this time very little was done to modernise the living quarters.  Cecil Harman’s son, Lancelot, wrote a book about his father entitled ‘Cheers, Sir’, in which he says of the vicarage at Worle:

“The vicarage apparently didn’t boast a bathroom or indoor lavatory, the only available being at the bottom of the garden”

In 1910 Rev. George Bode and his family moved into the house and remained there, caring for his flock until after World War One, when the vicarage was sold in 3 lots;  Lot 1: The Residence, Lot 2: Freehold Accommodation Land, Lot 3: Accommodation Garden Land.  the auction was held on 13th February, 1919, when it was bought by Mr. Jones of Fairfield House.  The coach house, cowshed and tennis courts all disappeared over time and in 1934 the building was converted into 3 dwellings, known as 1, 2 and 3 Kirklands.

The Malthouse in Worle High Street 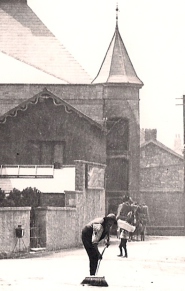 The Worle High Street talk on Thursday evening resulted in several new questions, but the Malthouse, featured in the 1909 photograph, left, caused the most interest.

The 'pointy bit' in the picture has been renamed the 'Turret' by one of our younger members.

Also Maurice Williams remembered being taken inside it by his late father. He thinks it housed a stair case at the time, which allowed access to different levels.  At a guess the date for this memory may be in the 1950s. The existance of the arched access points/windows suggests that its original purpose was connected with the storage of hops for the brewery.  The building, as far as we can ascertain, was built in the 1790s.

Maurice has since sent us the following message:

En route to Worle Station yesterday evening I had a quick look at the tower that appeared on a number of your photographic illustrations. An RSJ has been inserted into the tower just below the tapered roof. This may be to act as a support to some crane work of heavy items within the tower. I hope that it is possible to find out what is going on!

We would be very pleased to hear from anyone who can throw light on the history of the turret from its origins in the 18th century to its present day situation.  Maybe we can put together a case for a blue plaque at the site, or even a Historic England listing.

Picture of the structure, as it looked this morning, is provided below.  Please contact rayegreen@talktalk.net with ideas and information.  thank you. 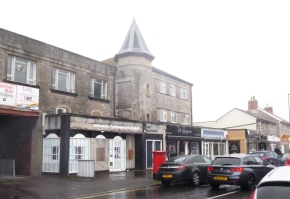 Jon Blythe replied to my query on facebook and provided the following information.  Many thanks, Jon.

Jon Blythe During the 70's I worked on the adjacent site when it was a used car lot and repair business.
The whole site being owned by The Imperial Laundry which had closed down and was being sold to developers.
The cottages at the Base of the tower, was the temporary residence of friends of mine, and I quite often had occasion to roam the old Maltings, (which it was,).
There was a spiral stair running up the inside of the tower, which had partially crumbled on the inside elevation but was still climbable.
I once had to climb up to rescue 2 of the family living there, (although I think I was the one that needed rescuing, lol). And there was indeed a beam running across the inside which supported a block and tackle. It was contemporary with the building.